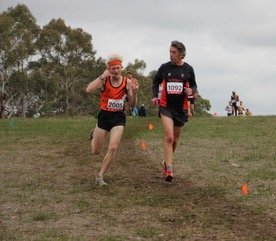 Round 2 of XCR’19, had our distance runners driving out to Myrniong and St. Anne’s Winery, for the first individual race of the season.

The day turned out to be not too bad, cloudy skies, no rain (major bonus) and not freezing cold.

The course is certainly challenging, as it is fairly undulating, with no real flat sections to regain your form. You were either climbing a small hill or racing downhill to try to make up some time. Thankfully it was a fairly fast course, as it was not too soft under foot and with no big puddles or watercourses to traverse.

Biggest highlight of the day, was Charlotte Wilson’s second place in the open women’s 8km race, only 2 seconds behind first place. Charlotte led the field for quite a bit of the race and pushed the runners early to stay with her. Only six seconds separated the first four finishers; very close racing indeed. And not far behind in fourth place was Makda Haji Harun, for a great team finish, to have two finishers in the top four places.

Our open women’s all round summer track and field athlete, Joanna Margiolis, had her XCR debut, as she is now adding distance running, over cross country courses, to her already very wide repertoire. They will need to add a new event to the athletics program, hepathletes who can also compete in cross country running; when they do, Joanna will be ready.

Credit to some of our athletes who decided to race and to support the club and to fill club teams, even though they were observing their Ramadan fasting.

Finally, these AV events would not be possible without our club members, family and friends, volunteering their time to ensure that our club provides the mandatory number of club helpers to AV at each XCR’19 event. So many thanks to Rae Andrews for helping out on the day, even though both of her children Brodie and Sienna were unable to compete. The other club helper duty was shared between Lisa Christie-Gunn and Robyn Coyne, who both chose not to compete, but came along to help out.

A big thanks to our photographers, Mel Hardiman, Glenda Morris and Lisa Christie-Gunn for taking the time out to share the club photographer role.

PrevPrevious ArticleLiam and Charlotte in the winners circle on the weekend.
Next ArticleNeil Lawson is Yellow Zones Best.Next