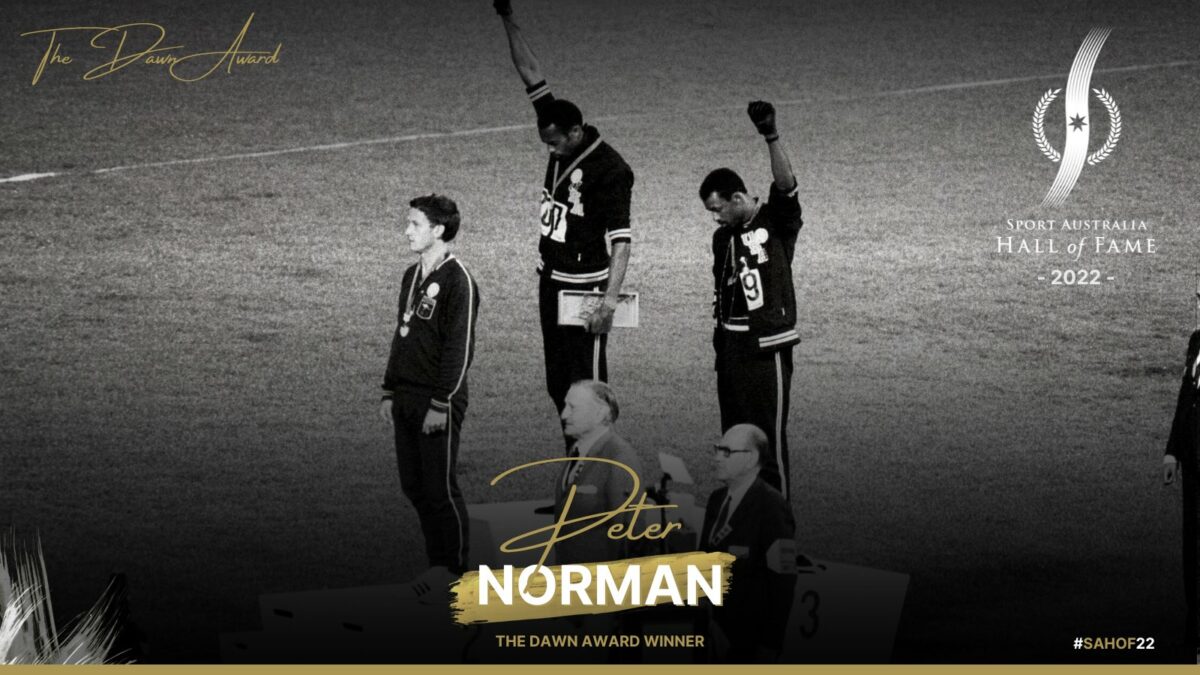 Former club member, the late Peter Norman, was overnight honoured with the prestigious “The Dawn” Award at the 2022 Sports Australia Hall of Fame Awards: Heroes and Legends, which was broadcast on Channel 7 last night.

The award recognises a courageous ground-breaker who has demonstrated achievement against the odds and challenged the status quo, something Norman demonstrated at the 1968 Olympic Games when he stood in solidity with African-American sprinters Tommie Smith and John Carlos in their inspiring protest against racism. 54 years after we continue to be inspired by Peter’s stance.

Olympic silver medallist, the late Peter Norman has been honoured overnight with the SportS Australia Hall of Fame’s The Dawn Award.

The Dawn Award, named after swimming great Dawn Fraser AC MBE, recognises a courageous ground-breaker who has demonstrated achievement against the odds and challenged the status quo, and Norman certainly did that during his memorable life, as reflected on by his wife, Jan.

“This would’ve meant everything to Peter, and certainly to the family, it’s wonderful for us,” said Norman.
“It’s such a shame that he’s not here to see all this. They have a statue of him at Albert Park Lake, they apologised in Parliament to him, and he’s won various other awards… he would’ve been absolutely delighted.

“He was an absolute larrikin, he was all for the underdog – which is how he got himself involved in all this in the first place.

“Some people weren’t happy that Peter wasn’t on the statue (with Tommie Smith and John Carlos). Peter was fine about that because he thought ‘this is great, because other people can stand in my place and be part of the whole thing as well’ so he was more than happy that it was just the two on the statue.”
The champion Australian sprinter is best remembered for the role he played at the medal ceremony after the men’s 200-metre final in the Mexico Olympic Games in 1968 when he supported fellow athletes Tommie Smith and John Carlos.

Smith and Carlos raised their gloved fists in protest at the treatment of African-Americans in the United States, a stance widely known as the Black Power Salute.
Wearing the Olympic Project for Human Rights badge, a dignified Norman stood in solidarity with the American pair.

Despite copping a subsequent backlash, Norman never backed away from supporting the actions on that day and for this reason he is the recipient of The Dawn Award for 2022.

Norman’s time of 20.06 seconds in the 200-metre final in Mexico City set an Australian record that stood well into the 21st century. The race had been perceived to be a battle between Smith and Carlos, but Norman split the pair to take the silver medal.

In one of the most controversial medal ceremonies in Olympic history, Smith and Carlos stood on the victory dais with fists covered in symbolic black gloves and shoeless to highlight the plight of poverty-stricken African-Americans.

The pair lifted their arms in the Black Power Salute as the United States flag was raised and the country’s national anthem played to a packed stadium.

Some argued Norman was not selected for the 1972 Olympic Games due to his stance in Mexico City, while others believed his failure to win a selection trial as he struggled with injury was the major reason why he was left out of the squad for Munich.

But Norman’s courage to take a stand against racism alongside Smith and Carlos was a powerful message that has continued to resonate with people across the world, with films and statues of the moment being created.

On his return home Norman faced a mixed reaction from the Australian public and sections of the sporting community for his role in the protest.

While many respected and admired his stance, others were less enthusiastic and denigrated his actions.
Smith and Carlos demonstrated their respect and admiration for Norman when they came to Australia to deliver eulogies and be pallbearers at his funeral in 2006.

In 2012, the Australian Government issued an apology to Norman for the way he had been treated.

At the time, the Australian Olympic Council (AOC) maintained Norman had never been penalised and was only cautioned for his role in the protest. But the AOC admitted it had been negligent in not properly recognising the significant role he played in an event that has become an important symbol for human rights throughout the world.

In 2018, Athletics Australia celebrated Norman’s contribution by creating the ‘Peter Norman Humanitarian Award’ to honour his legacy as an athlete and advocate for human rights.