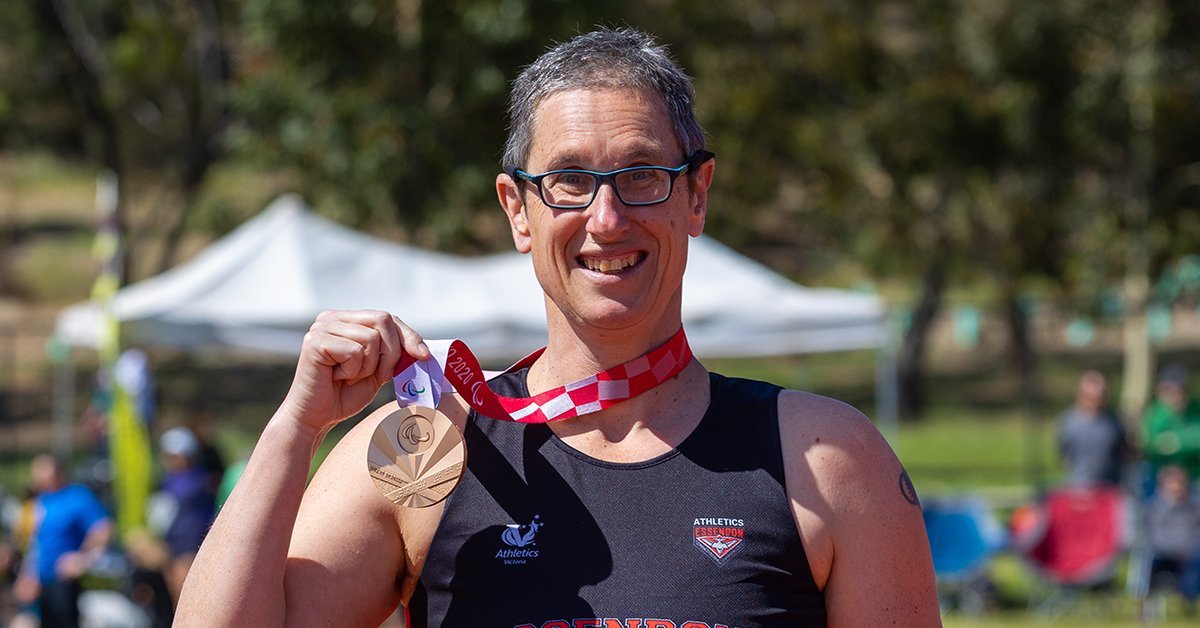 For most athletes who make it to the pinnacle of their sport, their dreams of glory begin in childhood. For Maria “Maz” Strong, Paralympic dreams began less than five years ago. Having been an athletics official for years, they picked up a shot put to join in the fun. Turns out they were pretty good. In Tokyo, aged 50, Maz became a Paralympic bronze medallist in the Women’s seated shot put F33. Athletics Essendon Junior Vice-President Joanna Margiolis sat down with Maz Strong to chat about athletics, para-sport and their experience of the Tokyo Paralympics in a pandemic.

Joanna Margiolis (JM): Now that you’ve had a few months to digest the excitement of Tokyo, how does it feel to be a Paralympic medallist at your first Games?

Maz Strong (MS): I still feel like I’m only pretending to be a high-performance athlete, and am still searching for meaning and purpose in all this.

JM: Most athletes dream of being given the opportunity to compete at this level. What went through your mind when you found out you were selected as part of the Australian team?

MS: With multiple Athletics Aus ‘A’ standard performances in the qualifying period, being selected to the team was more or less a formality. That said, I was officially notified of my selection on the same day I ordered my first pair of multifocal glasses. The incongruent combination of these two things amused me.

JM: There was a lot of uncertainty around these Games and if they would go ahead. They ended up being postponed by a year. How difficult was it trying to train in lockdown conditions and how did you stay motivated?

MS: I found the constant uncertainty and change of the last two years more difficult than periods of lockdown per se. That said, for several months in 2020, I didn’t throw at all, and trained mostly through adaptive crossfit classes on zoom. My strength and conditioning coach at the VIS gave me a limited equipment at home gym program to follow, but I mostly ignored it!

Before the pandemic, my throws coach used to divide his time between Melbourne and NZ. He’s only been in Australia once since March 2020, and that was for an event on the Gold Coast during one of Melbourne’s many lockdowns. We’ve been connecting entirely online. It’s a bit lonely sometimes.

JM: What was is it like walking into the Olympic Stadium for the first time?

MS: A very long way from first call. And wet – not the heat we’d prepared for.

Soon after we were brought into the stadium, I heard wheelchair racer Pierre Fairbank, who is also 50, being awarded the bronze medal in the 800m T53. I turned to my sports assistant, and said “let’s see if I can match that”. (The person who chose the music in the stadium was likely our generation too – they played ‘Flashdance: What a Feeling’)

JM: Not only did you manage to grab a bronze medal in an extremely competitive field, but you did it by breaking the Australian, Oceanian and Paralympic records in the process. That’s an extremely impressive statistic. What was your mindset when you were out there competing? Were you just focusing on each individual throw or did you have a particular target in the back of your mind?

MS: I went out onto field of play with a cue card listing technical points to focus on. Long at the back. Accelerate through the throw. Keep behind the shot. You have 6 throws to get it right (so it doesn’t really matter if you screw up one of them).

The standard of competition in my event has improved enormously since the 2016 Paralympics in Rio. In Tokyo, I was the third thrower of nine; all the other realistic medal contenders were after me. I knew I would likely break the Paralympic record, and be leading after my 6 attempts. The only question was how many athletes would surpass me as the competition progressed.

JM: Seated throwing requires you to take all your throws back-to-back. Do you have any specific techniques to quickly recover both physically and mentally after each throw? Or do you tend to build on the energy developed from the previous throw?

MS: I train in sets of 3 throws, pretty much as I compete – seated throwers get a short break between our first competition 3 throws, and our second 3. I wore a spiky bracelet to help ground myself, and forced myself to wait before each throw to get a bit more rest between attempts.

In my experience, though, the most difficult part of a seated throws competition is not the brief period while I’m on the frame – it’s all the waiting time while other athletes throw. Obviously, we’re not allowed to take electronic devices onto field of play to distract ourselves. In Tokyo, I took a sketchbook and markers and drew.

JM: You are the club’s only Paralympic medallist and the only athlete other than Peter Norman who has managed to get onto the podium at this elite level. It has taken 53 years for an Essendon athlete to join Norman on our medallist list. How does it feel knowing you are in such elite company?

MS: I didn’t know that before you told me, and it blows my mind. There are some very, very good athletes on that Olympians board – and, of course, Michelle Errichiello held a world record at one point, even if she didn’t quite make it onto the Paralympic podium in London.

JM: You have been an Athletics Victoria official for a number of years. What made you initially sign up as an official?

MS: I read something along the lines of “do your Level C qualification, then you can be paid to officiate school meets”. That said, at one point, I was a registered official in three different sports. I like feeling useful.

JM: You’d been around the sport for a while before becoming an athlete. What encouraged you to sign up as an athlete after so many years officiating?

MS: I saw Masters women having fun at interclub and supporting and encouraging each other. I saw athletes at AV Throwers supporting and encouraging each other. I had an inkling I might be half-decent as an athlete (or at least not terrible), but no expectation at all of being one of the best in the world! My goal was fun, fitness and friendship. High performance just happened.

JM: You’ve managed to balance being an official and an athlete very well. Is this something you’d encourage others to do?

MS: I don’t think I’ve managed to balance the two particularly well at all, though there are a number of officials who do. Yes, I would absolutely encourage athletes to train as officials. We don’t have enough, and without sufficient officials (and club helpers!), events can’t run. Many AV (and AA) officials are elderly – they won’t be able to keep going forever. And who knows, officiating may be your path to the 2032 Olympic or Paralympic Games.

JM: Over the past few years, you have been a strong advocate for Race Running. This has been around for a few decades and is now slowly growing momentum in Australia. How can clubs support athletes in becoming more aware of this event?

Clubs (Little Athletics clubs, as well as seniors) can help organise Come and Try days, or even regular training sessions. They can point interested athletes towards competition opportunities, and classification. Any individual club member who knows someone who may enjoy or benefit from frame running – let them (or their parents) know about it!

Access to equipment is a barrier. Running frames are expensive, and whilst they can theoretically be funded by the NDIS, they often aren’t in practice. And there isn’t yet a pool of outgrown or upgraded running frames for beginners to start training on. Fortunately, disability equipment supplier Dejay, who import the frames into Australia, are nice enough to keep letting people use their stock. Unfortunately, when organised frame running group training sessions stopped due to the pandemic, many participants didn’t have equipment to use in their own environment.

JM: If you could give one piece of advice to young para-athletes, what would it be?

MS: Have fun. Make friends. Keep training and improving. Try different events, or even different sports. If you can stand and walk, but your disability affects your legs, you may be eligible to compete either standing and seated – try both. If there are other kids with disabilities at your school, encourage them to try sport too. I’m pretty old, and didn’t find out about the Paralympics until I was 25. There is far more awareness now, and more opportunities for young para-athletes, but there are still people who don’t know that sport can be a place for them. Not all events are included in the Paralympic program. Ask your coach or club to help you find out which ones are included for you. That doesn’t mean you can’t compete in non-Paralympic events too – I do! In multi-class competition, percentages can be misleading. Sometimes, fitness and community are even better than medals. Enjoy the journey, wherever it takes you.