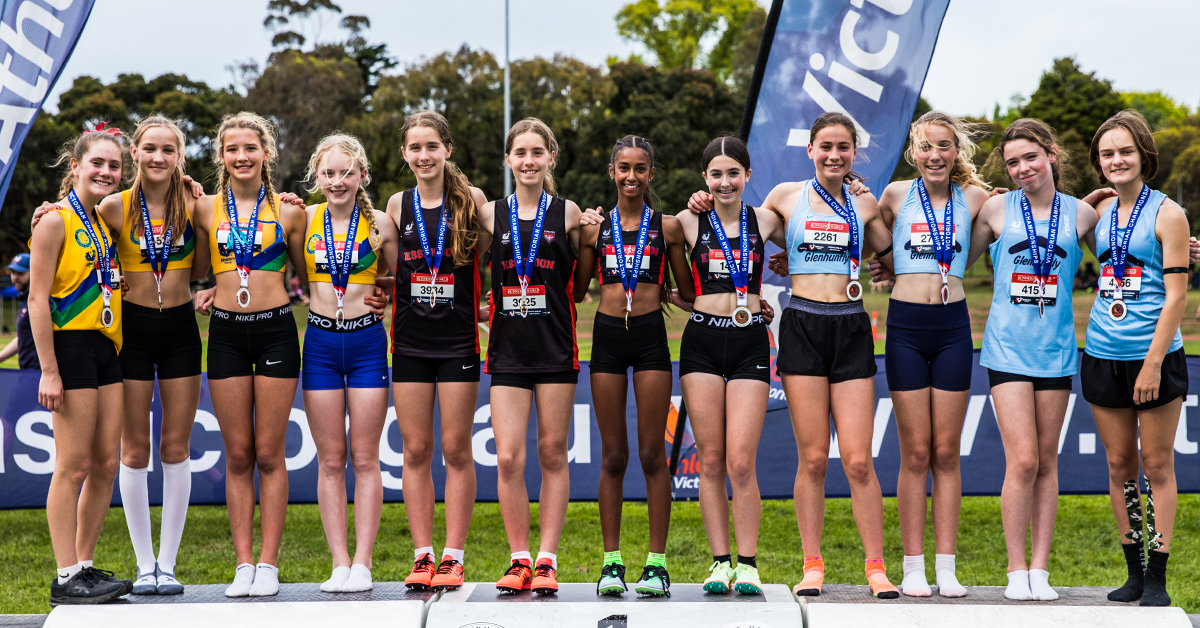 Congratulations to all our athletes who represented the club yesterday at the 2022 Victorian Track Relay Championships at Hagenauer Reserve in Box Hill. It was fantastic to see an increase of team entries from last year, as well as a number of podium finishes.

In tough and windy conditions our open women’s 4x1500m consisting of Matisse Lazzari, Ruby Ellis, Ally Rogers and Anna Kasapis opened up our 2022 campaign. In what was undoubtedly the sunniest part of the day they performed strongly against tough opposition to finish 4th in their final.

Our U18 men took on a highly competitive field in the heats of the 4x100m. With 3 clean changeovers the team (Mark Asllanaj, Marco Spagnulo, Rob Asllanaj and Lay Kankratok) charged home to qualify for the finals. Unfortunately, due to an injury picked up the heats they were unable to compete, but we’re sure they will be back next year making a strong finals push.

Our U14 women (Saana Jayasinghe, Hannah Gec, Sienna Gec and Alexis Shead) blazed to gold in the 4x400m. At their first Victorian Track Relay Championships they didn’t let the nerves get in the way and showed extreme determination to ensure they finished on the podium. They then backed up their performance with an incredibly smooth 4x100m final where they narrowly finished 4th in a photo finish.

The under 14 men (Lucas Harris, Harry Osman and Sam Meehan) were one man down for their 4x400m, however they didn’t let that dampen their spirits. The team went out and proudly represented the club in exemplary fashion and showed the very definition of what it is to be an Essendon athlete. Showing immense team spirit, they raced a fantastic three legs and were narrowly sitting in 4th when they finished their race.

There was a massive nailbiter in the men’s U16 4x100m. Arden Stevens, Will Hurt, Maddox Wilson and Raveen Alwis left everything on the track and went neck and neck with Glenhuntly the entire race. They pushed themselves right to the very end and needed a photo finish decide the top two positions.

From one of the first races to one of the last, our open women were back to tackle another middle-distance race, this time the 4x800m. Charlotte Wilson, Audrey Savage, Anna Kasapis and Lisa Gunn showed the depth of our open women’s team battling Ballarat Region the entire eight laps before coming away with silver.

Once again, our 40+ men showed they are a force to be reckoned with, coming away with gold medals in both the 4x400m and 4x100m. Spars Veljanovski, Marlon Cummings, Mark Giglio and Brett Maurer powered through the 4x400m to fend off Doncaster Athletics Club to secure gold. Kris Lakusa, Marlon Cummings, Colin Ritchie and Brett Maurer put on a show when they went toe to toe with Doncaster once again, this time narrowly edging them out to secure gold.

Congratulations to all our athlete on their fantastic performances and for representing our club at a state championship.

The success of these championships wouldn’t have been possible without a number of people. Firstly, we’d like to thank the following people for assisting with duties on the day; Paul Meehan, Kris Lakusa, Maryanne Gec and Joanna Margiolis.

This is only the beginning of our Championships campaign and we can’t wait to see what the rest of the season brings for all our athletes.

Full results can be viewed on ResultsHub.