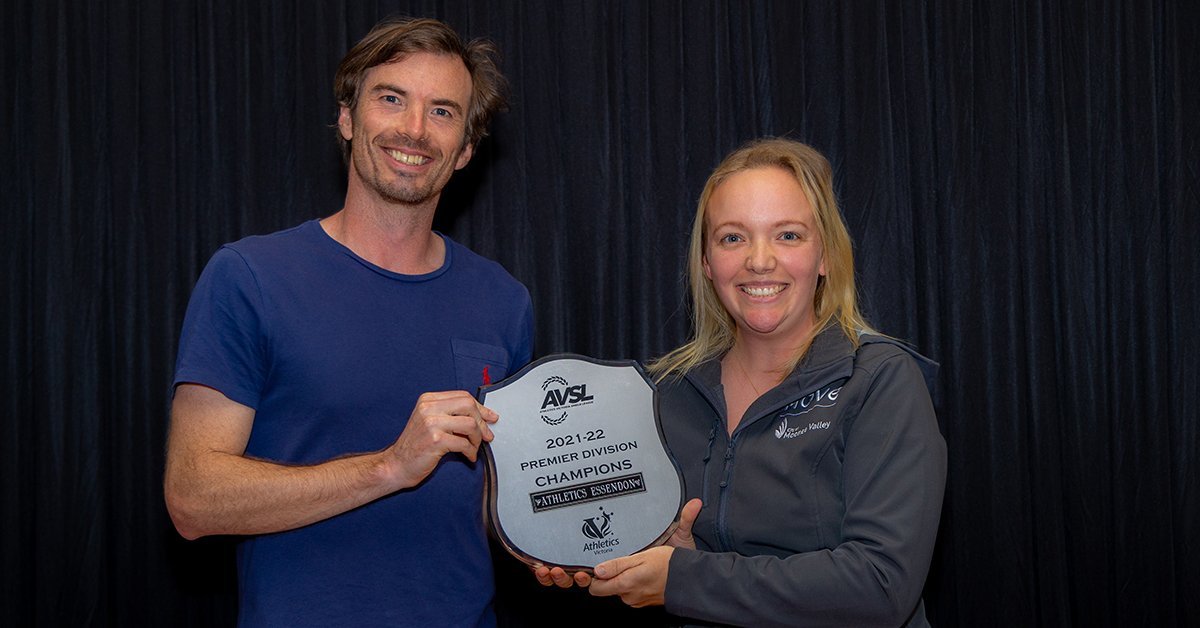 About 90 members, guests and family came together at Buckley Park Bowls Club to celebrate another successful track & field season. Our numbers were down a little on past years (thanks again Covid) but everyone who came along had a good day.

Decent weather allowed us to enjoy a few “ends” of lawn bowls and a barbeque courtesy of the culinary skills of Dom Condello.

It was great to have the Mayor Samantha Byrne speak and present club president Andy Boudrie with the AVSL premiership trophy; unfortunately AV CEO, Ross Cunningham was unable to attend.

Andrew thanked the council for its support of the club, investing in the upgrades to the club rooms and the light towers which are almost ready.

The Elaine McLeod Club Helper award went to Joel Cuzzi for his work throughout the season. Despite being injured Joel was always available to help. David Jones thanked all those who had completed club duties during the season and emphasised the need for all members to step up next season.

The inaugural H H Hunter trophy went to Charlotte Wilson. The H H Hunter shield is presented to the club which gains the most points at the Victorian Championships in the Open Age category. In 2021/22, Essendon came second to Box Hill and we are determined to go one better next season. Charlotte gained the most H H Hunter points for Essendon.

The AVSL awards were announced by Mikaela Selaidenakos and Nina Lawson. They thanked our Team Managers – Sam Healy, Adrian Wrout, Joanne Margiolis, Mel Foster, John Cooper and Brian Anderson – for the work they did throughout the season.

The “Most Valuable Athlete” award went to those athletes who gained the most points for the club in each Age Group during the “Home & Away” season.

The “Most Outstanding Performance” award went to those athletes who achieved the highest individual score, as long as they competed at least three times.

Brett Maurer read out a long list of new club records; it was a tribute to the many athletes who broke not only club records but State, National & Oceania records. Brett will take over the Club Records portfolio next season. We rely on athletes, parents and coaches to keep the club up to date when a record is broken.

Service badges were handed to those members who have achieved 5, 10 or more years of service. If you weren’t present on Sunday, you can collect your badge at training on Tuesday or Thursday from Arthur.

Brian Anderson spoke of Arthur’s amazing commitment to the club; 75 years puts him in a league of his own. As an athlete, official and general club man, Arthur is a true club legend.

Arthur then had the task of announcing the winner of the Arthur Whitchell award, which goes to a person who has contributed to the club in a way that makes it better and more successful. For her work with the club’s media, the Open / U 20 team manager and as a diligent committee member, the award went to Joanna Margiolis.

The Athlete of the Year awards were probably the hardest the committee has ever had to decide on.

There were so many great performances throughout the last 12 months. There were 10 junior athletes in contention; all had broken records, won gold at state and nationals but with three World Junior Qualifiers to his name, Archie Noakes took home the Junior Athlete of the Year Award.

It was much the same with the senior award. How do you pick between three Olympians and so many other great performances? In the end, with a bronze medal in Tokyo and an Australian and Oceania record, the Senior Athlete of the Year Award went to Maria Strong.

Thanks to Vishnu Satish and Joel Cuzzi for taking the microphone; thanks to our ward councillors Narelle Sharpe and Ava Adams for attending and presenting awards. Thanks also to our long term sponsor and supporter, Andrew Maitland for coming along. Andrew is part of the Melbourne Sports Physio and Podiatry team who are moving to North Essendon next week.

Thanks to Linden Hall and Chris Mitrevski for helping present the AVSL awards; there are many excited young members who now have some of Linden’s gear!

And finally, to Liam Adams who raced in Sydney on Sunday. He had planned to join us after winning the Half Marathon but his flight was delayed and he didn’t get home until almost 11pm.